Reefilla wants to drastically change how you can charge your electric car, with a “valet service” managed through cloud and AI

Electrification is the future of automotive. It will take time, first because electric cars still cost too much for many potential driver, even if they are environmentally conscious. But also because many countries still lack a proper charging infrastructure. An electric car is a pleasure if you live in a city with many charging stations. If you don’t, moving “green” can be a nightmare. Italian startup Reefilla was founded to solve this problem, thanks to a new charging service based on moving battery packs and predictive AI.

Marco Bevilacqua, Executive Officer & Product Development of Reefilla, created the startup between 2019 and 2020 as part of I3P together with Pietro Balda, Marketing & It Operations Officer, and Gabriele Bergoglio, Finance, Logistics & Operations Officer.

The three founders started from a simple idea: the refueling model we’ve been following since cars were invented is not applicable to electric vehicles. Yes, the number of public and private charging stations is growing, but it will never be the same of the cars that will be on the road in a few years. Not unless every driver can afford its own recharge box at home. And this is a very distant goal.

Hence the idea of a managed service of “energy delivery” that complements the public infrastructure. Reefilla essentially wants to bring energy to cars where and when it is needed, with an important value proposition: users do not need to explicitly ask for a recharge. Reefilla is not intended, if not marginally, as an emergency solution but as an ongoing service. When they subscribe to the service, users authorize Reefilla to access the data on battery charge status, car location and mileage generated by their car.

Car data are analyzed by a next-gen cloud monitoring platform and passed to an artificial intelligence predictive algorithm that estimates when a car’s charge level will drop below 20%. Using this forecast, Reefilla has an estimate of when one of its recharge vans will have to move to the car’s location. All data are managed anonymously and in full compliance with privacy regulations, Reefilla says.

When a monitored car battery goes below the 20% threshold, the recharge process starts: a van is alerted to reach which car and where. Reefilla has a fleet of electric vans supplied with battery packs that can recharge a car in 30-50 minutes. When the van reach its car, an operator connects the battery pack to it (there’s no need for the car driver to be there because the charger door will be opened remotely by the Reefilla cloud platform) and then, when the recharge is completed, disconnects the battery pack and goes to the next car to recharge. 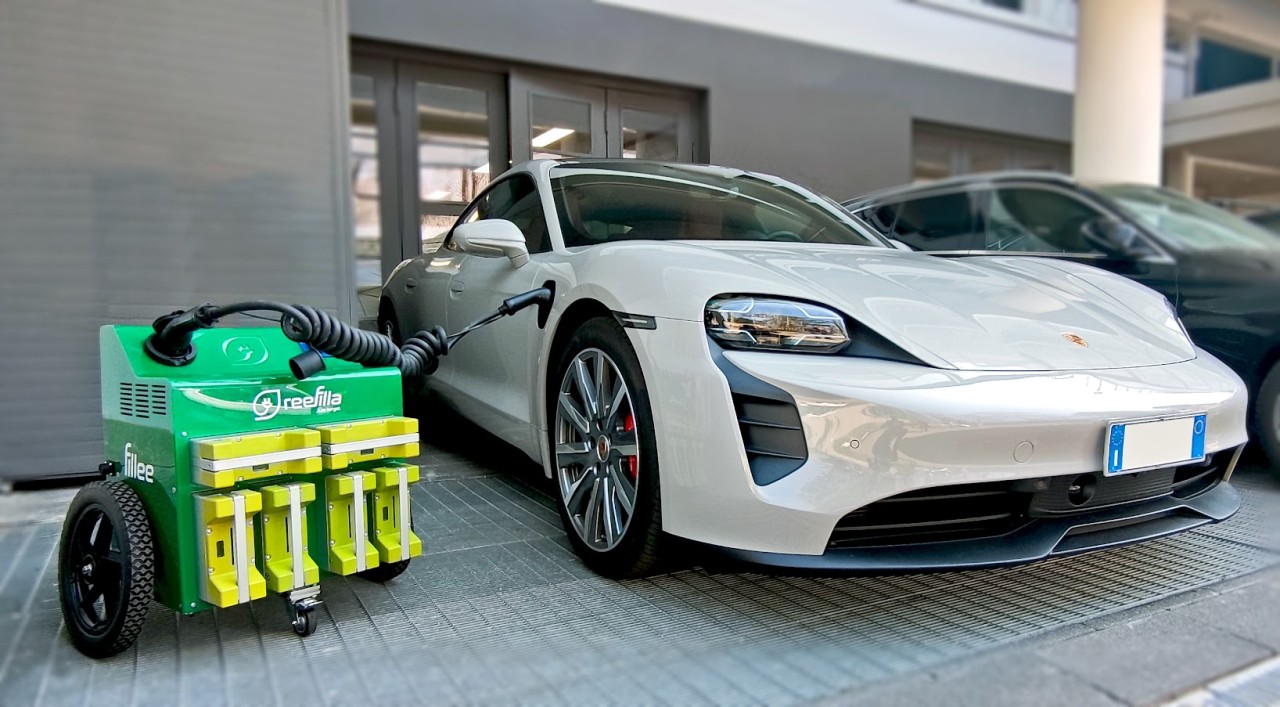 Logistics is everything here. To maximize the number of recharged cars and to minimize operating costs, Reefilla must get a very accurate scheduling of van routes. These are planned analyzing actual data coming from the cars and also estimating their future position and parking times based on customers’ driving habits (remember that privacy thing? It matters here).

The thing with green batteries

Electric mobility is considered the best form of green mobility. But batteries – how they are used, reused, disposed of – are always an issue. Reefilla uses batteries originally designed for micromobility (therefore already approved for mobility applications) but modify them with proprietary (and patented) electronics and power devices.

Battery packs are recharged by distributed and certified renewable energy plants and their life cycle is estimated between three and four years. After that they must be recycled, and Reefilla believes that in this timeframe lithium cell recycling will be so optimized to be close to 100%. Thus, old batteries will be used to manufacture new cells. Reefilla has also defined some partnerships for the development of storage solutions using "second life" batteries, i.e. battery modules that after a "first life" on a car still have enough residual capacity to power applications such as mobile charging.

Reefilla plans to officially launch its service in Milan in the second half of 2022, and then in the largest Italian and European cities. Some partnerships are already active in Germany.

If you liked this article and want to stay up to date with news from InnovationOpenLab.com subscribe to ours Free newsletter.
Tags: startup automotive mobility reefilla green